Decimal system is a commonly used number system where every number is expressed in base ten. Each place has a value which is obtained by multiplying 10 as many times as the position of the number minus 1

If we go from right to left place becomes 10 times smaller.

Consider the number 234.25. "." is called the decimal point. As we move from right to left after decimal point place becomes 10 times smaller.

Conversion of decimal to fraction 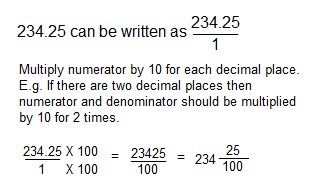 
Get me the extra edge for Olympiads Exams